The creator economy is inextricably linked with the no-code movement, but they are still two separate movements each with its own trajectory. Understanding the creator economy requires a deeper exploration of independence, creation, patronage, and the power of technology in general - that’s what this post is all about.

What is the creator economy?

In short: a creator economy is a large group of independent creators building solo, tech-enabled digital businesses. But that sentence contains a lot of loaded terms:

Related Post: 114 Top No-Code Experts You Should Be Following

A solo digital business is any business that can be run from a laptop by one person.

In this context, tech-enabled means that software handles the jobs of multiple employees (marketing, customer support). The creator can run their entire business solo. They can also work with just a small number of contractors or freelancers supporting them.

The past of the creator economy 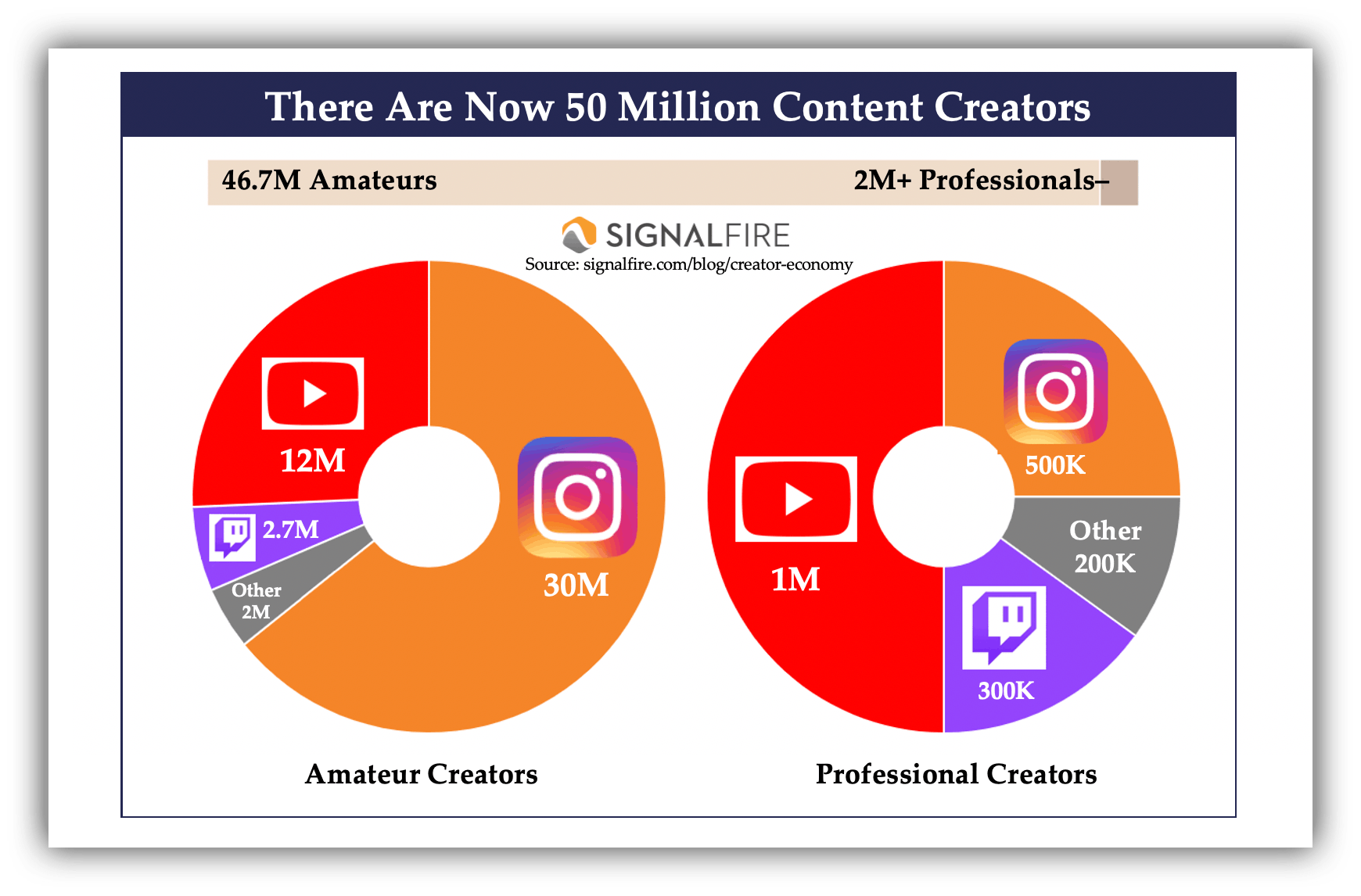 Also known as the “passion economy,” creator economy came about due to a confluence of three factors:

1. The concept of patronage in the artistic community.

Harkening back from medieval times, lords and ladies would lay patronage. They would pay a salary and offer benefits to artists in order to have direct access to them for commissions. Modern patronage has a slight twist to it. Instead of one aristocrat paying for exclusive access to an artist, multiple patrons pay small amounts to support a creator’s work. This way they get access to exclusive, member-only content.

As the cost of starting a business decreased, investors sought out proxies of success and landed on audience size. The logic went that businesses with the biggest audiences to distribute products to also had the highest chance of success. The shifting tide toward audience-first business building put a new spotlight on creator audiences, opening opportunities for creators. They both monetize their audience through brand partnerships and use their audiences to launch their own businesses.

3. The scalability of the technology.

Creators in the modern era often rely on multiple revenue sources. This meant significant time and resource investment just to create those products or manage the sources, limiting creator income. The scalability of technology tackled both challenges. Not only did costs of production go down with free or low-cost software, but distribution also became cheaper with ad networks and social media. As a result, creators could actually make the unit economics of creation. They make something once and sell it multiple times - work as an independent entrepreneur.

How is the creator economy growing in 2021?

Over 50 million people consider themselves “creators,” and the creator economy market size is through the roof: 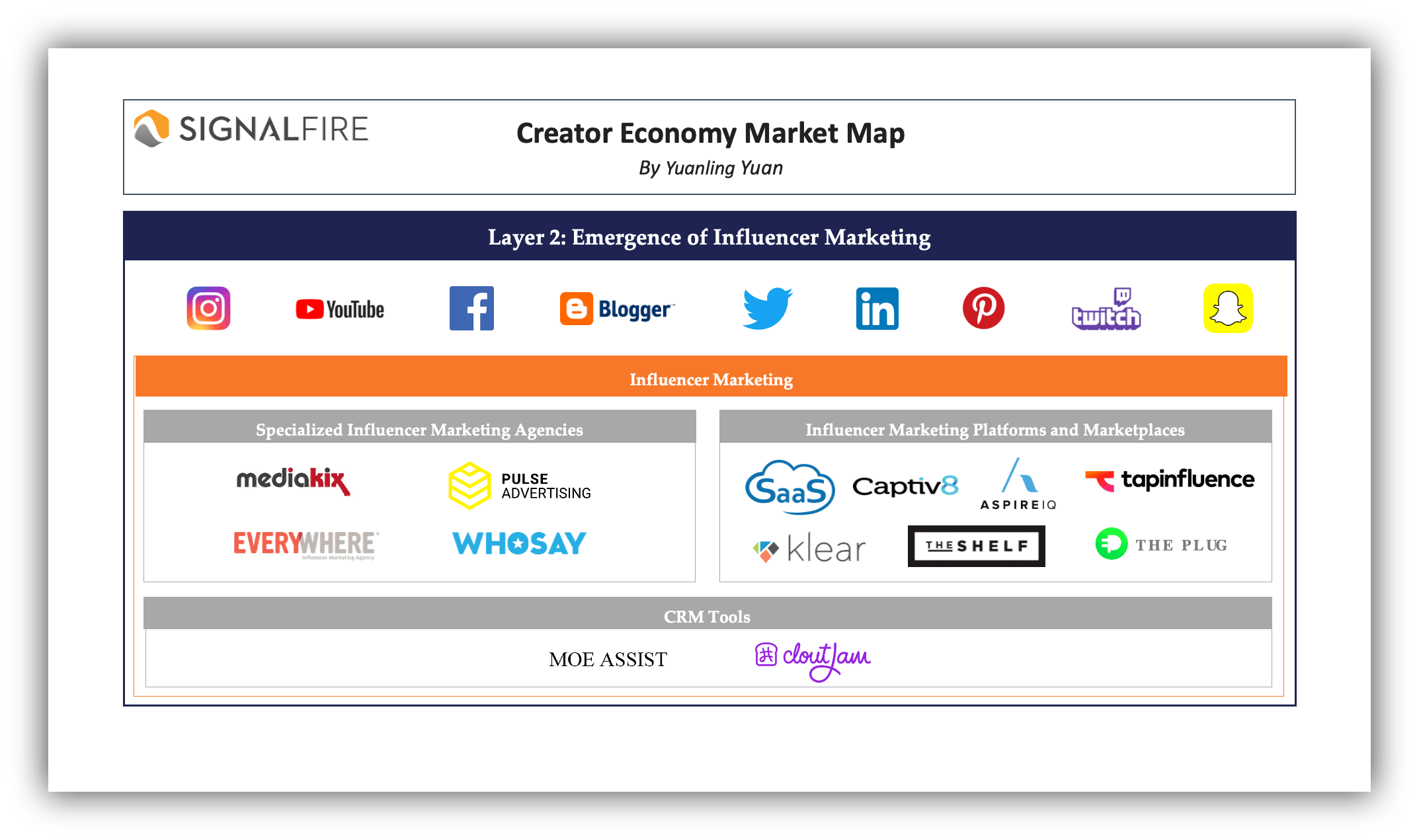 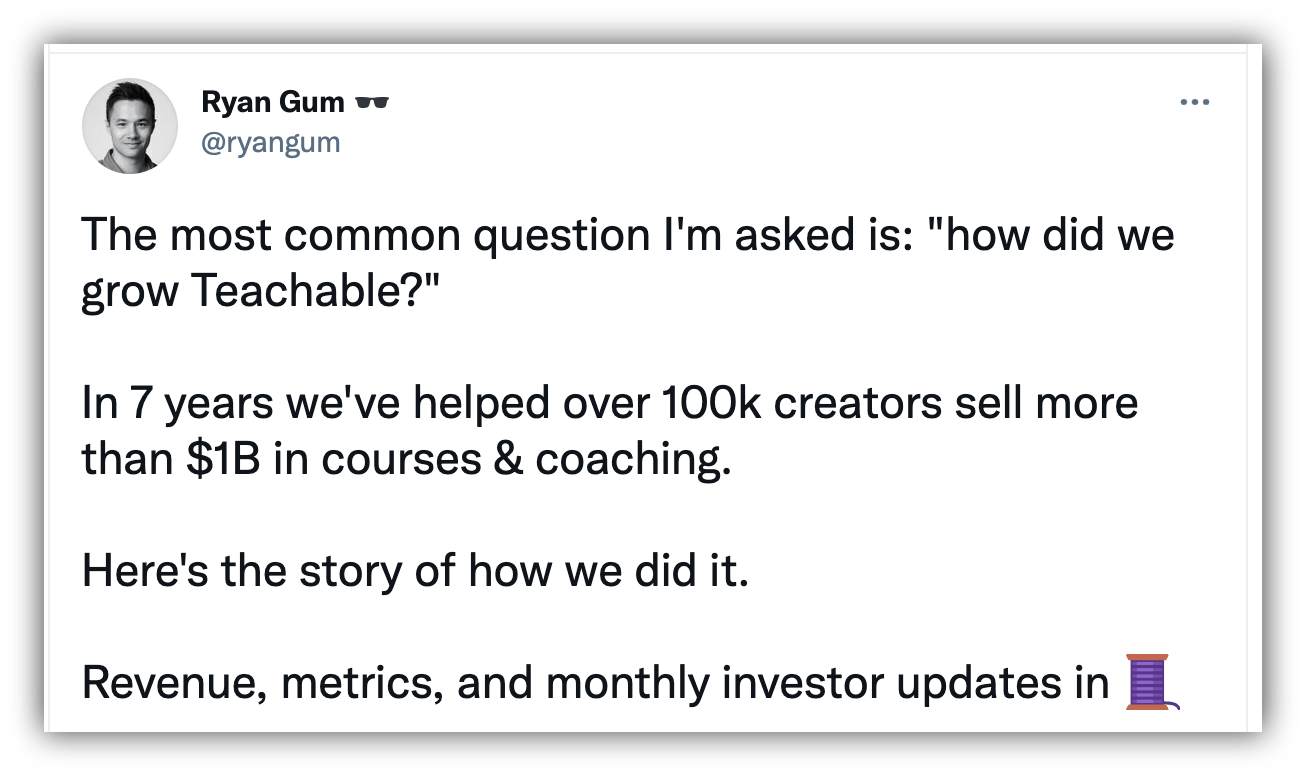 These numbers, while big, are nothing compared to the value of creator economy platforms:

And these are just some of the companies powering the creator economy growth.

From YouTube to no code: a brief history of the creator economy growth. 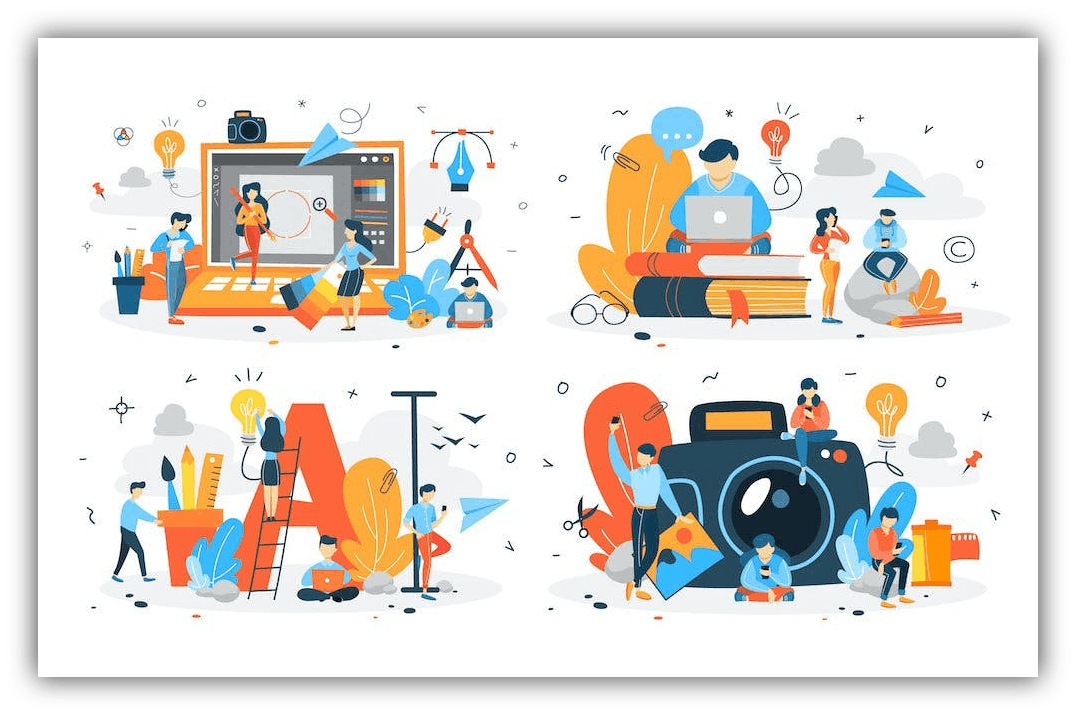 The modern creator economy has a rich history, which came about in roughly three phases:

The earliest pioneers of the modern creator economy, community builders, took advantage of novel technologies. They were brought about by the internet: blogging, YouTube vlogging, and later posting on Instagram. These creators focused on audience building, engaging with their communities, and building loyal followings that hung on their every word or image. This opened up monetization opportunities, primarily through YouTube ads or sponsored content within Instagram and blog posts. Sometimes, creators would hack together the ability to accept payments and offer subscriptions to their most loyal fans.

As creators gained huge audiences - often into the millions of followers - they became celebrities in their own right. They would operate across multiple platforms, using one platform to pump up the other. In a way, these influencers became more like media companies than individuals. Top tier influencers were making millions per year through branded sponsorships or through selling their own merchandise.

This evolution involved a mindset shift. Instead of seeing themselves as the brand (which enabled selling merchandise with their face on it), they would become the entrepreneur. They would use their clout and influence to build a variety of products that go beyond novelty and into actual solutions. Common products included online courses and other info products and even into building and selling technology. The latter were often inexpensive, single-function platforms which later became known as “micro-Saas” in some online forums.

With audience-first business building now a commonly understood way to launch a startup, many would-be creators focused on building their audience first. The vast majority will never reach millions, or even hundreds of thousands, of followers. However, creators are learning they can monetize their audience at much smaller sizes.

These creators - the ones who run revenue-generating audience-first businesses at smaller scales - are part of a new burgeoning category: the creator economy middle class.

Members of the creator middle class are often freelancers, coaches, or consultants. They use their audience to sell high-value services, online courses, and other digital products. A key difference between the creator middle class versus traditional influencers is one of identity. An influencer likely has followers who just love them for their look or personality. Followers of creators in the middle class usually do so for practicality and to learn something from the creator as an expert.

The economics of the creator economy middle class

This creator economy middle class is what most excites investors.

Becoming an influencer is, at least in part, due to luck. You can do everything right - make great content, post consistently, and engage genuinely - but still never “go viral” and gain a million followers. However, the success rate of jumping into the creator economy middle class is much higher, which means more people can try it out.

With the creator economy middle class model, the unit economics of platforms like Patreon make a lot of sense. The top creators make $200,000+ per month, but there are only a couple of hundreds of those. The average creator might only make $500 per month, but there are thousands globally. The platform makes more money from millions of smaller creators rather than hundreds of influencers.

Each platform - and then undoubtedly the “all-in-one” platforms that will naturally follow, like Expedia did for the travel industry. They could feasibly support millions of small creators around the world. And that provides the potentially outsized returns that make them attractive to venture capitalists.

How no-code powers the creator economy 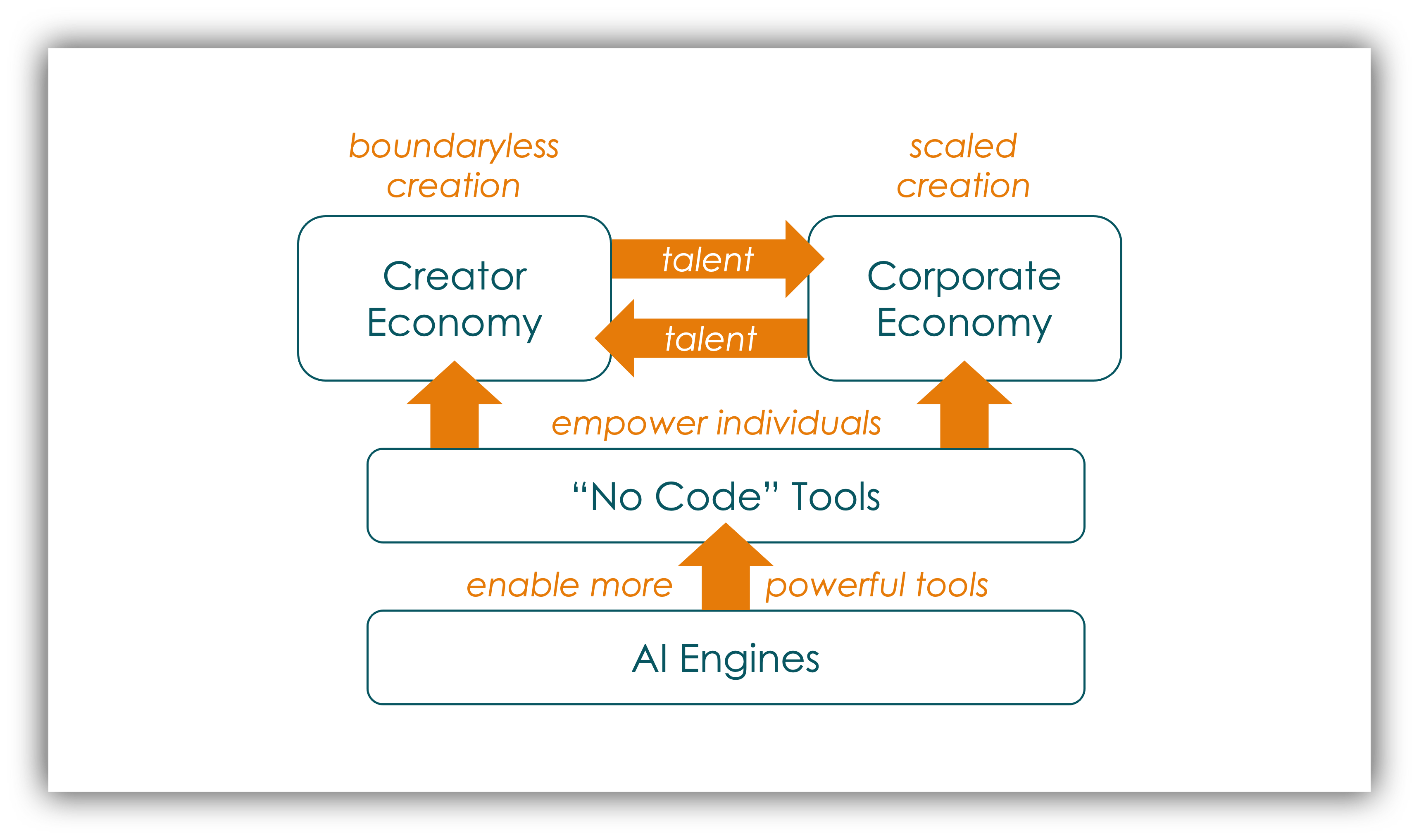 To achieve the creator economy growth over the previous years, it required multiple kinds of platforms to run successfully: creation, distribution, monetization, and business management. The no-code movement helps make all of these platforms easier to build and work with.

The vast majority of people in the world can’t code or have use cases that mainstream platforms don’t properly service. No code platforms help creators build the functionality they need to run their creator business and engage with their audience.

Beyond extending functionality, no code empowers creators to create and sell technology products to their audiences. This opens up a huge new business opportunity. Instead of selling low-margin merchandise or spending time building multiple course products, creators can develop custom-built technologies that perfectly solves their audience’s various challenges.

Power to the creator

A key part of the creator economy growth is the disintermediation of connection. You used to have the people that created and the audience owners. To sell anything, the creators would need to broker a deal with audience owners, often for a significant chunk of profit. New tools of the future of the creator economy, from existing platforms to no-code builders, help creators develop a direct connection with their audience. Add a dash of entrepreneurship and the scale of the internet, and you have a huge opportunity for people to build million-dollar businesses. Or more with only one employee: the creator themself. 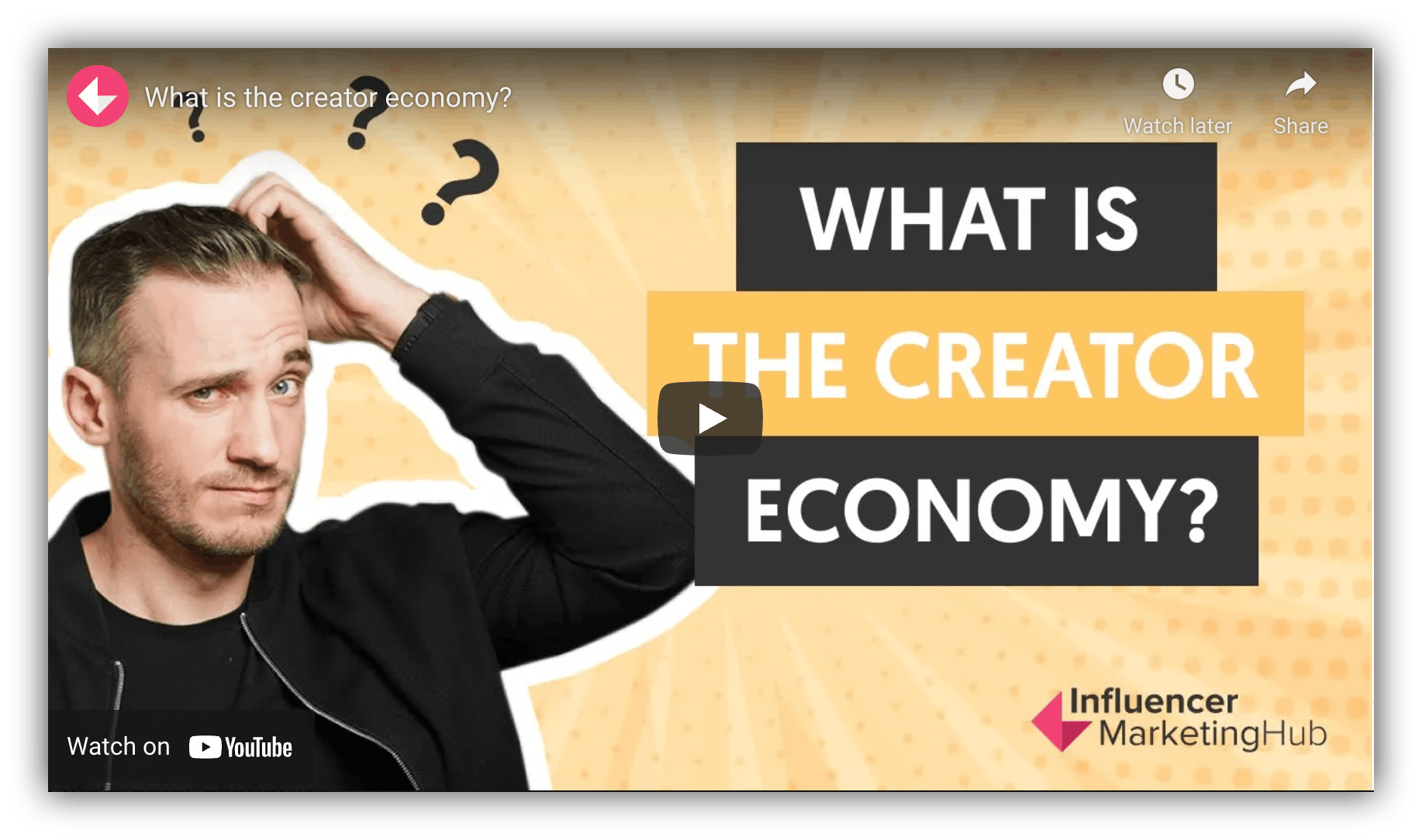 Softr is an easy-to-use no-code platform that turns Airtable bases into powerful web apps, online communities, and client portals. Softr offers a way for you to authenticate your end-users, control access to your content and data based on conditional rules like roles, logged-in status, subscription plans, etc. If you're using Airtable as a product catalog you can use a Softr template to build your e-commerce website. Or maybe you'd like to build a custom website for your travel journal, there's a template for that too!