Nic Touron is the founder of toolmeup.io, an online resource directory of the best startup tools for founders. We asked him to tell us a bit about his project and why he chose Softr for building the directory. He has a Master's Degree in Business and has worked in consulting, computer vision, and edtech. During his professional journey, he has been in direct contact with many CEOs and entrepreneurs who had hard times picking tools and technologies for their startups.

"Even though some of them were the most brilliant people I knew (PhDs and experienced founders), they still made poor judgement calls on the tools they purchased and implemented on their business."

That's how Nic came up with the idea of creating toolmeup.io as a startup tools directory for helping entrepreneurs choose the right set of solutions for their startups. Currently, toolmeup.io mainly focuses on curation and advanced information (integration, addressing complexity, etc.). 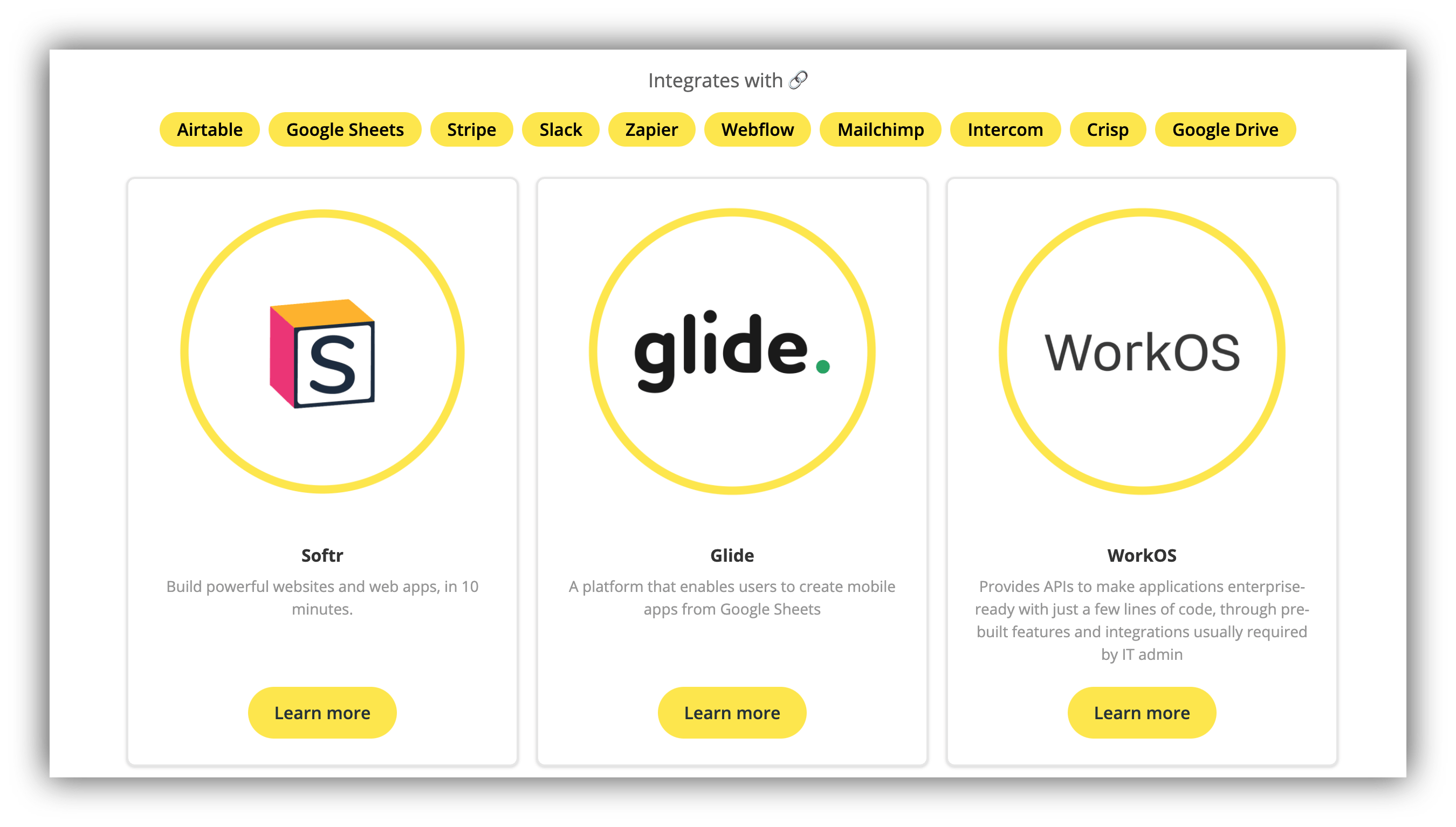 At the very start, Nic wanted to build a voice application (inspired by apps such as Alexa and Google Assistant). However, such apps required an extensive database and advanced technical solutions, while Nic was looking to validate his idea quickly and wanted to build a usable product as soon as possible. Therefore, he needed a tool that would allow him to do that without spending much time building the product and preferably without coding.

He had heard about Softr before, as it was among the platforms startup founders were using and eventually decided to give it a try. When he found out that he could go from an Airtable database to a full-fledged web app in just a few minutes, he realized that Softr was precisely what he needed. At first, Nic thought he would use it as an early-stage tool and move on to something else. However, after using it for a few months, he realized that Softr offered everything he needed to build his web apps: memberships, paywall, gated content, interactive lists, integrations, and so on. On top of that, Softr also had a resource guide template to get started easily. Today, he is certain that he won't need to migrate to another tool, especially considering the fact that Softr is releasing more and more new features on a regular basis.

We also asked Nic what he thought Softr's most significant advantage was compared with competitor products. According to him, the quality and speed to output are really underrated in the no-code ecosystem. While some competitor platforms give you more freedom, when you see the results produced by actual users who are not professional developers or designers, they are very often average at best. One needs to have the required skill set and spend a significant amount of time to achieve good design through customization. Thus, one of the most important benefits of Softr is that it offers a good balance between freedom and constraints, allowing even beginners without any tech background to achieve impressive results within a short period.

"If you are at an early stage in your project, and Softr can help you make what you need – don’t waste your time with custom tools. Stay focused on the quality of your content, and make sure to test your idea with a fast & good looking web app!"

We also discussed Nic's experience with customer support and Softr community in general and were pleased to hear his feedback.

"As I joined the Softr community pretty early on, the support’s help has been critical for my business. All my questions have been answered in a matter of minutes. And when something wasn’t possible, the support team came back with a custom code solution for me."

Nic also mentioned that more and more features that were previously achieved via customization are now becoming part of Softr, so now he rarely needs a custom solution anymore and can achieve the required result with the functionality provided out of the box. 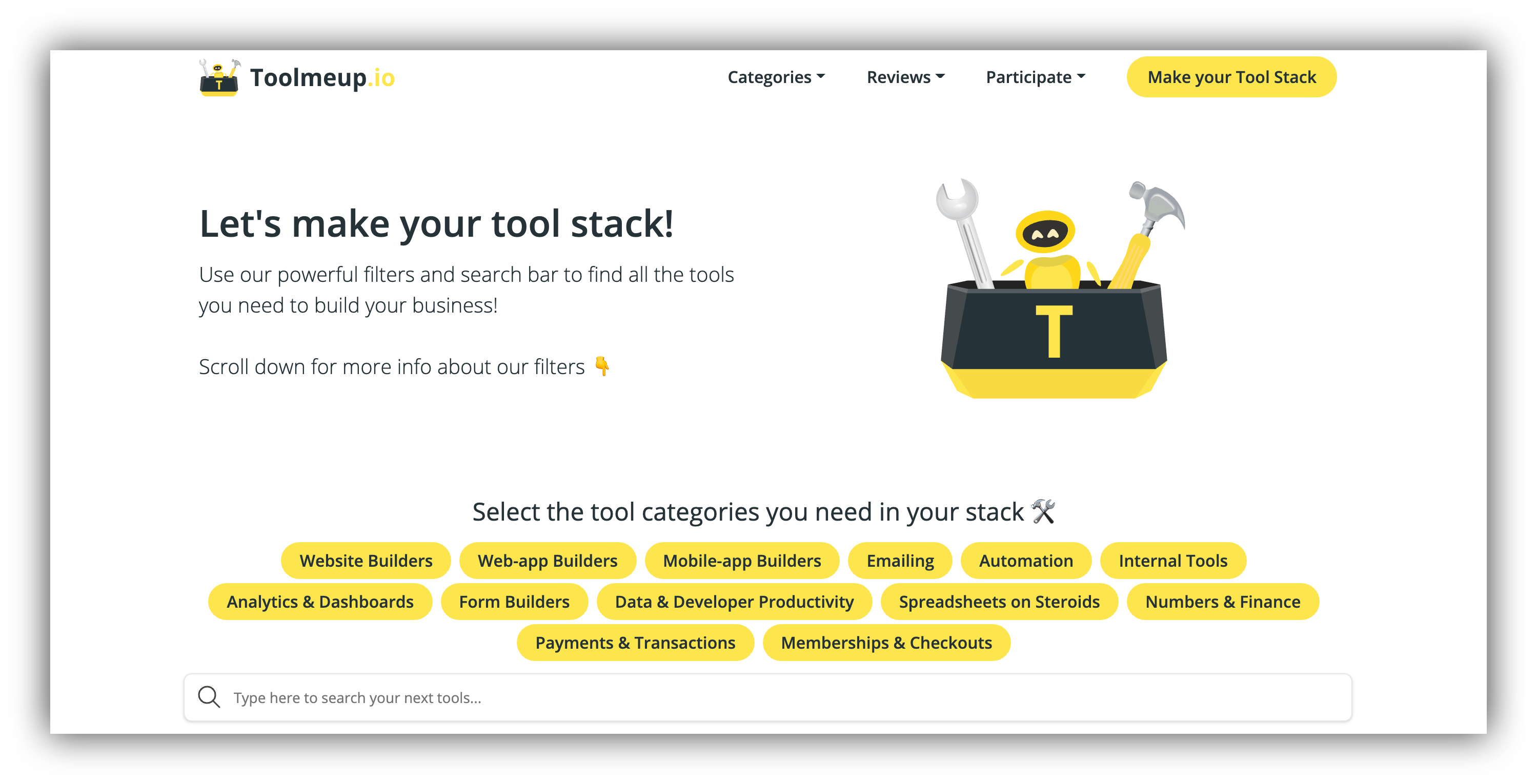 Nic says that it's still early to speak about achievements, as he and his project are just about to enter a growth phase. Nevertheless, he's already received lots of positive feedback on the project.

"I got many compliments concerning the UX and ease of use. But the real accomplishment is that I came up with a web application of this quality with just a few hours per week to work on it!"

He plans to take advantage of Softr's newly-released linked lists feature to improve on his platform's functionality. Also, he's currently working on the "pre-made tool stack" feature, which will be an ideal solution for first-time entrepreneurs who are new to the no-code world. For instance, if someone is looking to build a mobile application with e-commerce functionality, he/she will be offered a specific set of tools to be used in MVP, Launch, and Scale stages.

How LendingApp used Softr to power Its SaaS product