NextCohort is an extensive library of cohort-based courses from all over the world. We discussed with NextCohort's co-founder Chez how the project's idea originated and how Softr helped them build the directory website. Chez doesn't have a technical background and his journey started when he joined the On Deck No Code Fellowship and experienced the power of cohort-based courses. As a result, he decided to help make such courses available to as many people as possible and came up with the idea of an online directory that gives access to cohort-based courses on different topics. As soon as the idea was clear, Chez and his co-founder Viktor had to think about the implementation steps, choosing the right toolset. 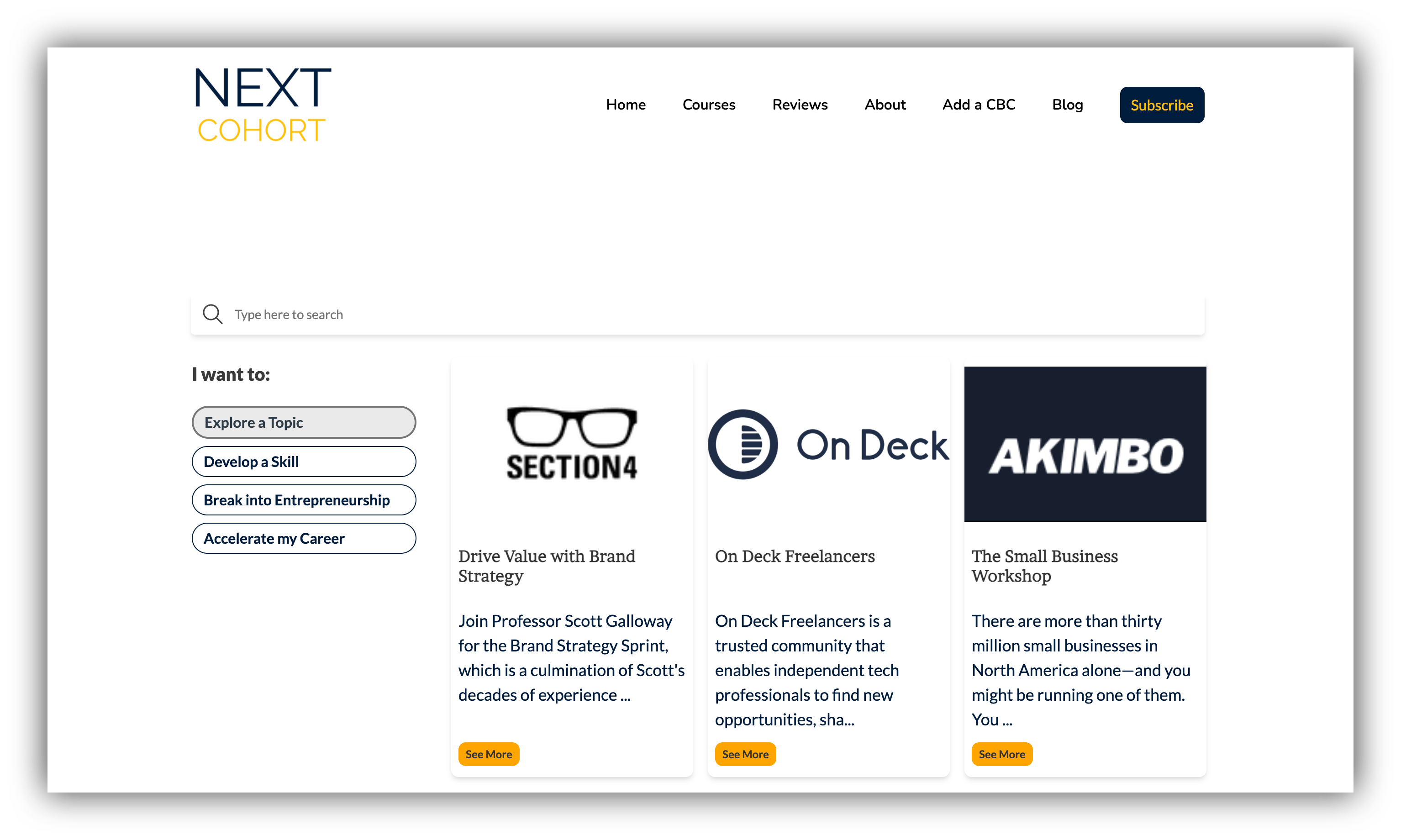 Chez was already into no-code when he started looking for a suitable no-code platform for his project. Thus, he started researching the best directory website builders to explore the functionality of each tool and see which one fitted his requirements best. After trying out a few competitor tools, Chez learned about Softr on Product Hunt, and that's when his journey with Softr started.

"I realized that Softr suited my needs the best, jumped over, and never looked back."

According to Chez, Softr is well-equipped as an online directory creator, allowing to handle really large Airtable databases and present them through a nice user interface that incorporates search and filtering capabilities that are easy to set up and customize based on your needs.

We also asked Chez to list some of the key advantages of Softr from his point of view. He emphasized the good balance between advanced functionality and simplicity, which is exactly what the Softr team has been trying to achieve from the very start.

"Softr is the goldilocks of no-code — not too difficult, not too simple. It’s powerful in that you can build a dynamic app that reacts to user inputs, yet is simple enough to build quickly."

Chez also mentioned the easy learning process and the built-in templates and styles that allow non-designers to make stuff that simply works.

"As a non-designer, I need a system that forces me to ship and not get stuck forever on pixel sizing."

He's also had a really good experience with the customer support team that has been able to assist with all the inquiries. Another thing Chez mentioned is the big number of educational videos that different members of the Softr community have created on their YouTube channels. He really likes the quality of content and thinks it provides a good basis for getting started with Softr. 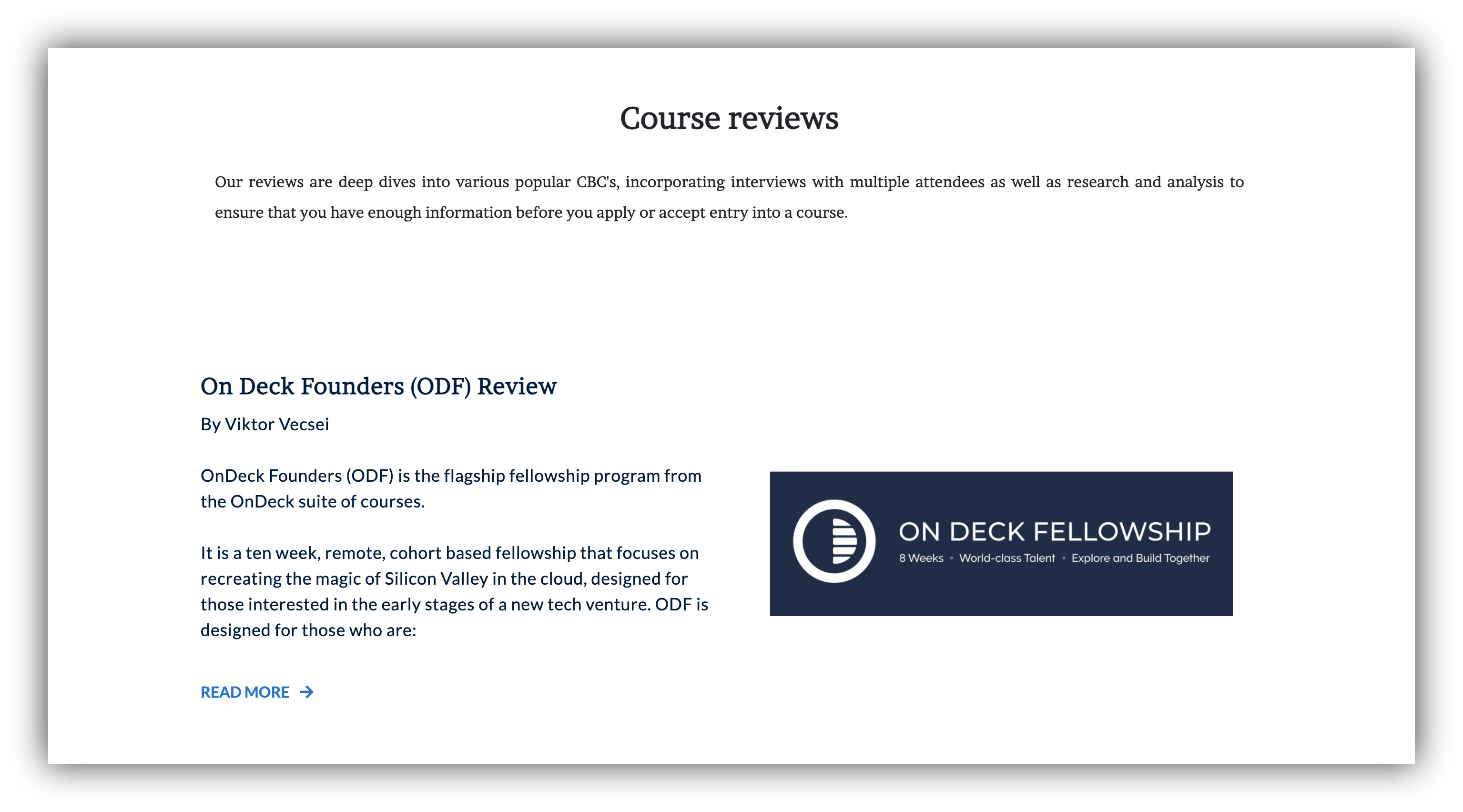 First results and plans for the future

The metrics (site visits, time on page, bounce rate, etc.) have been really positive so far and indicate a big potential that still needs time to be fully realized. In particular, the newsletter, through which subscribers regularly receive new course updates, has 115 signups already. The NextCohort team plans to continue expanding its course library and attracting more visitors. An important feature, which was added after the launch, is the Reviews section where the NextCohort team provides in-depth reviews of the cohort-based courses that are part of their library. Growing the Reviews section with new valuable content is one of the top priorities at the moment.

Chez and the team have also recently launched user reviews, where anyone can submit a brief review for any of the courses. Moreover, the NextCohort team are also interacting a lot with their users to try to identify some of the high-priority features that are worth incorporating into the product as it grows.