of the Day and Week on Product Hunt

Everyone’s got an idea, right? Few people, however, build that idea into a living breathing product. Meet Akhil, a product designer based in India. He’s among those few people that managed to make magic happen.

While always fascinated with the idea of building digital products, Akhil felt restrained by his lack of coding abilities. So, the moment when he got introduced to no-code tools was a gamechanger for him. To kick off his build journey, he managed to build a basic prototype of a product he had in his head for a while. Softr came in handy in helping him launch his very first product – Adsets.

Adsets was supposed to be a directory of successful ads from different industries, and the first version was a simple Notion page, which received pretty positive feedback from the audience.

At that point, Akhil was hooked on the whole process of product building. Luckily, he got introduced to Build by SkipTheLine, which is a 4-week program to help you ideate and launch your side project. It allowed him to focus on refining and launching Adsets in just 4 weeks.

"Shipping this project has had a profound effect on my outlook towards building things in general. I'm feeling more excited than ever about the projects I can build."

Inspired by the success of the project in such a short period, Akhil made plans to launch his next project. 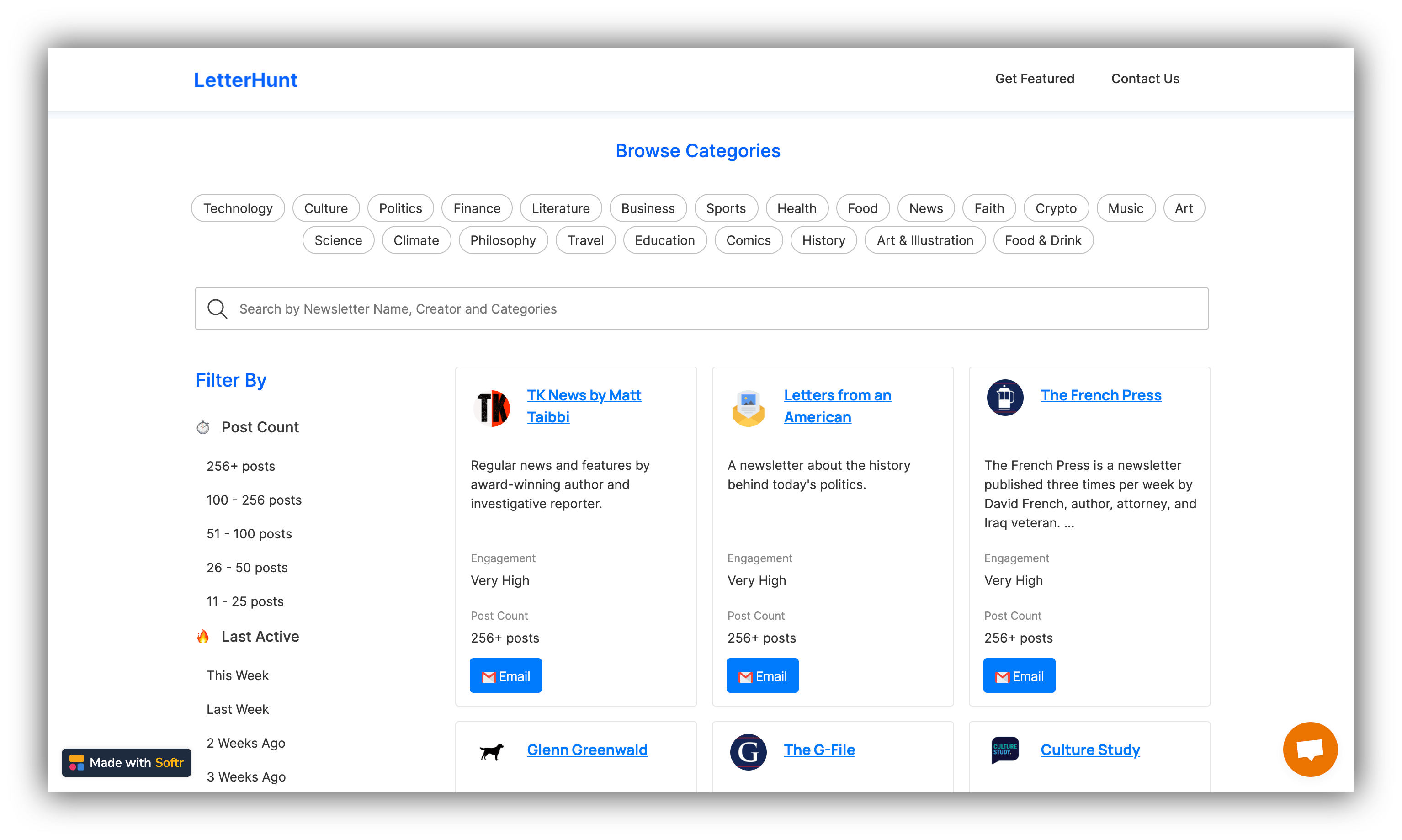 B2B marketers are always looking for channels with relevant audiences to promote their products. Newsletters have emerged as an exciting channel to reach out to relevant audiences. However, finding the right newsletter and reaching out to the authors takes a lot of time.

Tapping into this challenge, LetterHunt was conceptualized by Akhil and his pal Madan to help marketers promote products through newsletters. Akhil and Madan were also lucky enough to find a mentor who helped them through every step of the process. Abhash K (VP of Marketing at Springworks) helped them develop Letterhunt into an extensive directory of 10k+ active newsletters from 20+ categories offered as an Airtable database.

While the entire database took a significant amount of time to collate and is chargeable, in the spirit of giving back, the team introduced a free version comprising a sample of 100 newsletters. Both versions are available for purchase and download on Gumroad, but the site visitors have access to a directory that provides an interface for the sample data, where users can get a taste of the product by not only searching and filtering but also submitting newsletters. 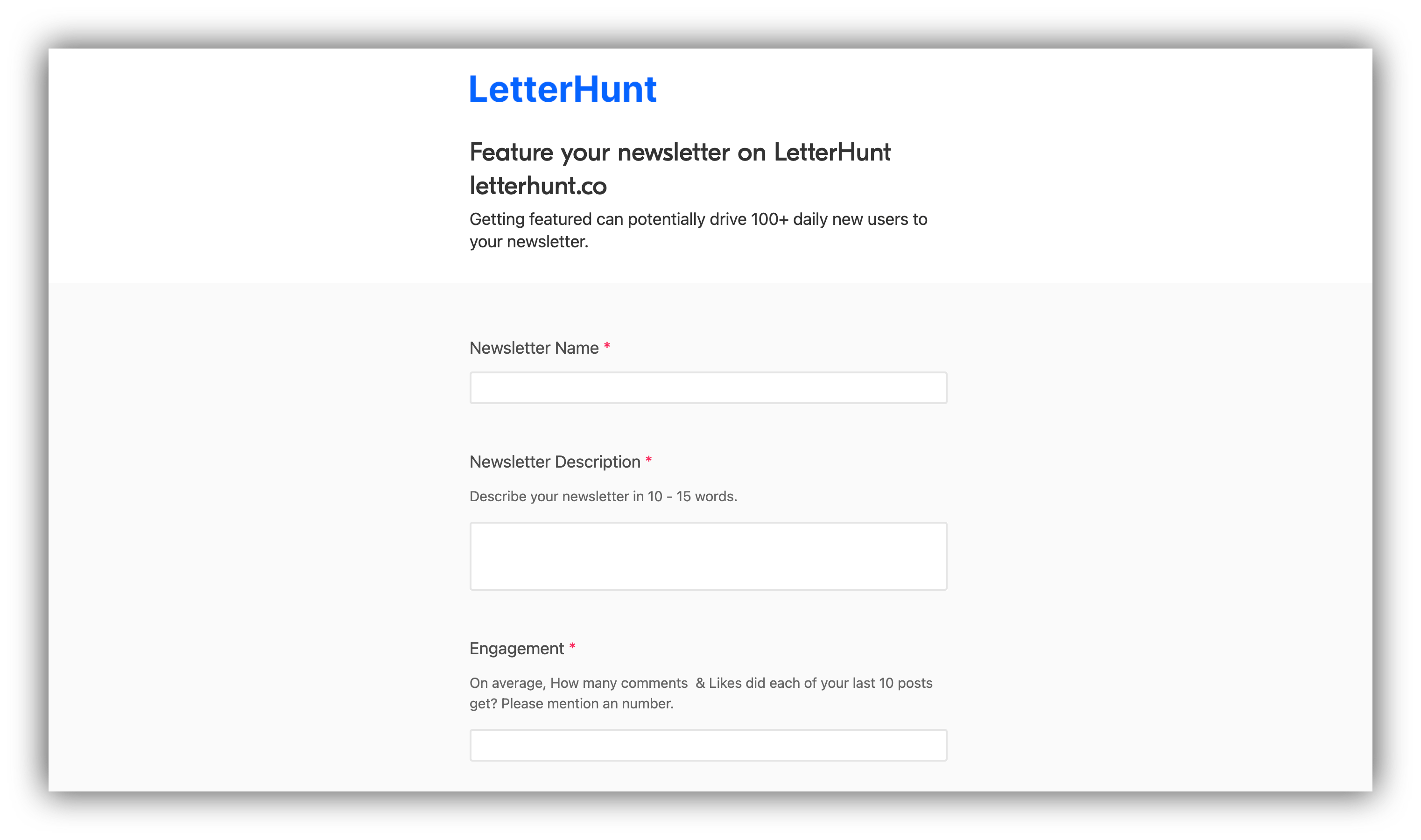 When starting with LetterHunt, Akhil was already familiar with the no-code landscape from his experience of working on Adsets. Therefore, he narrowed his search down to two options: Softr and Pory. He tried both the tools to build a prototype, and Softr proved its mettle. Akhil felt that the Softr platform was more intuitive, and there were a lot of customization options to explore (on top of everything, a ready-made resource guide template was available too). Moreover, Softr's free plan offered a lot to play with, which eventually turned Akhil into a paying customer.

He also emphasizes the support that the Softr team provided during the project and even after the launch. His product getting featured in Softr’s newsletter was a big win for Akhil.

So, when asked to sum up the key benefits of Softr, Akhil listed the following aspects:

Voila! Akhil and Madan were able to build and launch the website along with a sample newsletter directory, newsletter submission form, and other components within a really short period of time and offer their unique Airtable collection of newsletters through Gumroad.

"For someone who does not code, finding a technical co-founder is a huge challenge. With Softr, we realized soon that we had found a reliable tech co-founder, who could give us an MVP in 15 min!"

Thus, it’s always a smart move to choose the right tool from the very beginning, which allows you to spend more time on product discovery (including idea validation), customer development, and other important aspects.

So, using just these three no-code tools – Softr, Airtable, and Gumroad – Akhil and Madan managed to build, launch, and successfully monetize their side project in just a few weeks. That’s the power of no-code!

Overall, there have been 454 purchases of the database so far on both of the Sample and Paid versions. Moreover, the Letterhunt team has successfully launched their product on Product Hunt, becoming #1 Product of the Day and Week.

Akhil and Madan continue working on LetterHunt with greater vision and enthusiasm. Right now, they’re looking for new distribution channels, as they’ve observed a drop in traction. (If you’d like to partner up, feel free to get in touch with them.)

They also plan to grow the product further and are going to offer similar databases from other areas to keep up with the new trends of YouTube creators, Instagram influencers, and so on.

According to Akhil and Madan, the whole process of creating and launching LetterHunt has been a really valuable experience for them full of insights. So, they were kind enough to share a few takeaway words from their journey.

"When you are building something, do not forget to have fun. Everything else should be secondary. Also, in the very beginning, a lot of hype is generated around a product’s launch. But it needs long-term efforts (no matter how small) to keep its success going."

People are always looking for change-the-world ideas. Instead, you can start small, take the first step, see your idea materialize into a living breathing product, and move toward something bigger step by step.