FoundersDoor is a program managed by Your Startup, Your Story (YSYS), which is a startup community that assists talented entrepreneurs in discovering interesting opportunities in the tech industry. The program recently launched an online library of educational content for promising entrepreneurs and used Softr to build it. We asked Kwaku Dapaah-Danquah (Entrepreneurship Manager, YSYS) a few questions to understand why his team chose Softr for the project, and how our platform helped them realize their ideas and launch the FoundersDoor Library.

FoundersDoor was initially a 6-week incubator for first-time London-based founders to help them get from the idea stage to validation and thus creating an online community of learners around entrepreneurship. However, the COVID-19 pandemic forced the FoundersDoor team to make a digital transition and provide their audience with pre-recorded workshop materials, which they could study at their own pace. The program participants were really supportive of the decision and, by the time the last cohort had graduated, the FoundersDoor team had collected a significant amount of valuable educational content. It was at this point that they came up with the idea of establishing an online educational platform and making the content available to a wider audience. After trying a few other options, they eventually ended up with Softr, which provided them with the set of features required for the project and allowed them to implement their idea to its full extent.

“As part of YSYS’ 2023 mission, we wanted to really scale up our impact, and it then crossed my mind that creating a platform for people to freely access our curated online courses would be a powerful way of democratizing how people can gain really tailored advice on their own startup goals, whilst also creating a funnel for founders to join our community.”

FoundersDoor’s very first online presence, even before the COVID-19 transition, was a collection of presentations used during the sessions on a basic site built with Google Sites. However, when the program went online, the team was looking for a solution that would allow them to host the online video courses, and the Teachable platform was chosen for that purpose. It did the job while the program was in progress, but, when it ended, the FoundersDoor team started looking for a solution that would fit them better long term. It didn’t make sense to keep paying for the monthly subscription, and also there were several important features that were missing in the FoundersDoor library. The team started looking into no-code solutions and after some research and comparison, they decided to go with Softr.

“A friend of mine, Dan Parry, who is really into the no-code movement recommended a few options for my use case. After some research, I found that Softr was the best fit.”

There were several key features they were looking for, and Softr had them all:

Moreover, Softr’s built-in template for online courses made it easier to get started but also provided enough flexibility for customization and branding. Kwaku also emphasizes a few other aspects that he personally likes about Softr.

I like the diversity of templates that are available and the thoughtfulness that has been taken in making the building process as simple as possible for non-coders. I found the process to be very intuitive and the supporting videos and tutorials were super helpful. I also really valued the ability to get help from the Softr team when required.

The FoundersDoor team highlights that the experience of using and building on Softr was very smooth, and they only needed to reach out to the Softr team with some technical questions a few times, getting super fast assistance. Eventually, they were able to move forward as planned and launched the program according to their schedule.

Softr enabled FoundersDoor to bypass the technical complexity and the need to hire an engineer, thus reaching their goal of creating a hub for the wider public and establishing a funnel for the further growth of the YSYS community. For FoundersDoor this is just the beginning, and they plan to evolve further, growing the platform and the community. 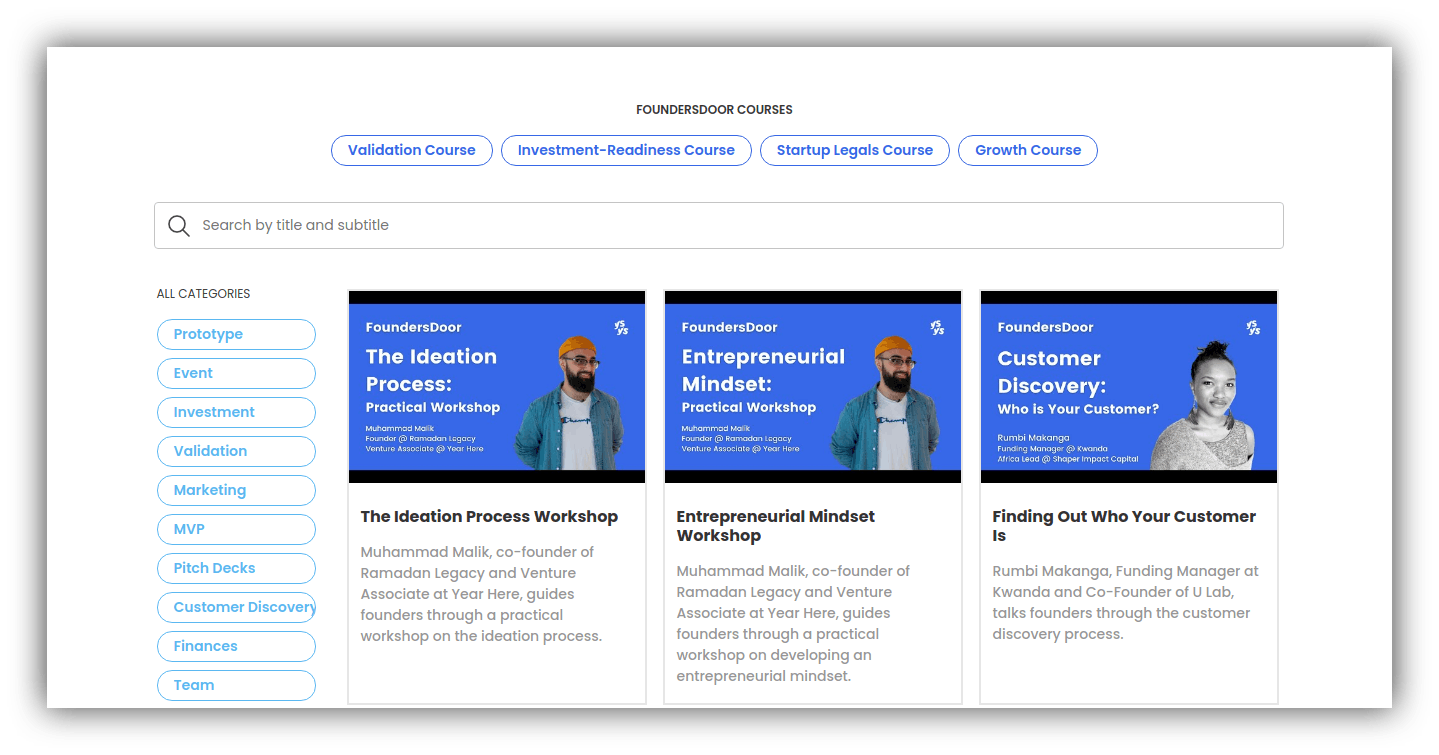 First results and next steps

A week has passed since the platform’s launch, and there are already 110 newly-registered users on top of the existing 125 community members who had received access from the very beginning. The FoundersDoor team expects to see its user base grow and will be reaching out to new startup experts, who would be interested in contributing to the library. They plan to gradually grow the community as well as expand the knowledge base, covering more topics, providing additional viewpoints on the existing material, and more. They are also looking forward to the upcoming Softr releases to provide new features to their users (downloadable content is one of the most expected ones at the moment).

Apart from that, currently the YSYS team is also considering the possibility of creating a similar platform but this time for tech talents who are looking for career opportunities, and they plan to implement it using Softr as well.